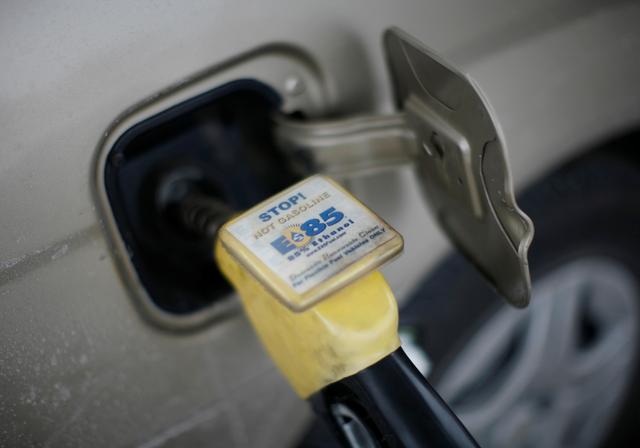 FILE PHOTO: E85 ethanol fuel is shown being pumped into a vehicle at a gas station selling alternative fuels in the town of Nevada, Iowa, December 6, 2007.
Reuters/Jason Reed
By Stephanie Kelly and Jarrett Renshaw | NEW YORK

NEW YORK (Reuters) -The U.S. administration plans to propose in days the amount of biofuels oil refiners must blend into their fuel mix this year and next year, as it reaches out to lawmakers to discuss the move, three sources familiar with the matter said.

President Joe Biden's administration has delayed decisions on 2021 blending obligations by more than a year, and it missed a deadline to finalize 2022 obligations this week.

The delays came as the COVID-19 pandemic hammered fuel demand and Democratic lawmakers focused on other legislation.

Officials for the Environmental Protection Agency (EPA), which administers the mandates, declined to comment on the timing.

The EPA has told at least two U.S. Democratic Senate offices to expect retroactively lower volumes for 2020 and 2021 and a restoration of volumes in 2022, according to one of the sources.

The oil and biofuel industries have called for the EPA to announce the proposals, saying delays have created uncertainty for the market.

Merchant oil refiners and the biofuel industry have battled over the requirements for years. Refiners say the mandates are too costly, while ethanol producers and corn farmers like the mandates as they have helped to create a multibillion-gallon market for their products.

Reuters previously reported that the administration was considering big cuts to the blending requirements, a move that would anger the biofuel industry.

The agency would also set the level for 2022 at about 20.8 billion gallons, Reuters reported.

The EPA did not comment on those levels at the time of publication.